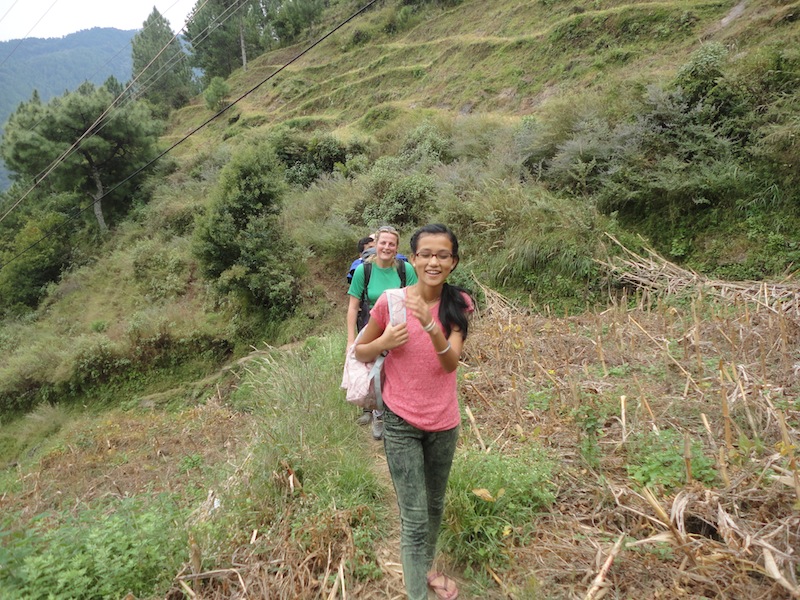 Bimala on the first hike up to Gatlang…

Thanks to all the support for the ‘Bring them Home for Dashain’ festival, all but 13 children spent the festival with their families and relatives. For the children who couldn’t be with their families, we wanted to give them a special memory with their Umbrella family! Volunteers and children travelled to Rasuwa for an “unforgettable” adventure as the children dubbed it afterwards! It also meant for the first time in years, all homes were closed for a few days and House Parents got some extra and well-deserved time off. From long treks, hiking in the mist in the forest, constant rain, campfires, card competitions, cheeses factories, holy lakes, buddhist gumbas, meeting old Umbrella friends and a whole lot more – it was a memorable trip! Kopila kept a short diary: 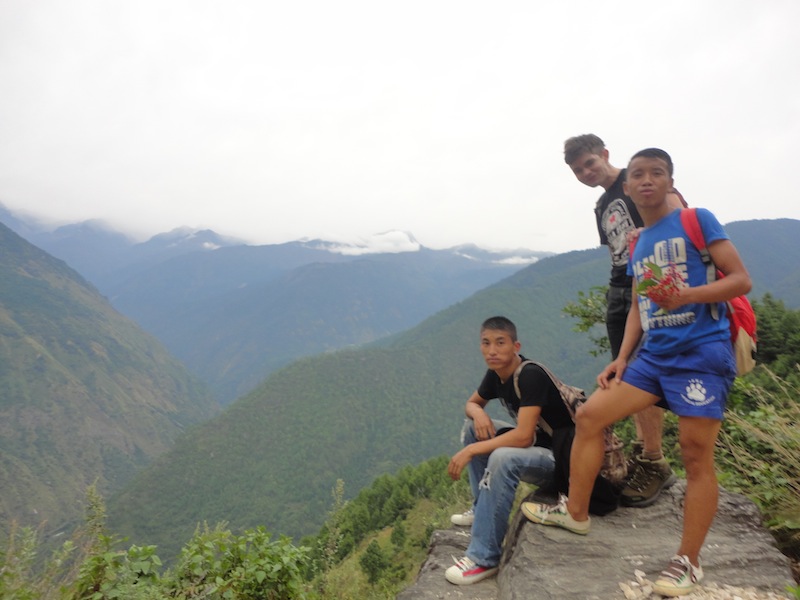 Oisín brother, Maan and Bir stop to enjoy the view and much on some local maize cane…mmm…

On Saturday 12th October 2013, I got up early in the morning for the Rasuwa trip for 3 days. My friends, volunteers and I went to Rasuwa by jeep . We took snacks on journey and when we arrived in Syaphrubesi. When everyone arrived, we went to our guesthouse, watched a film and ate dal bhat. We were so tired so we went to bed early. 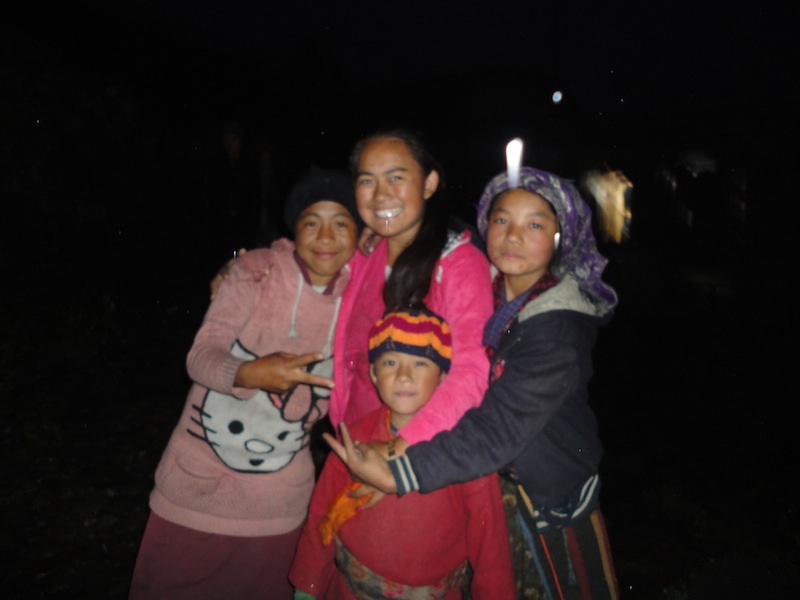 Look who met up in Gatlang spending Dashain in their home village – Rojina and Tshiring from the old Solhimal Girls Home and Sanju from Gauri Shankar!! 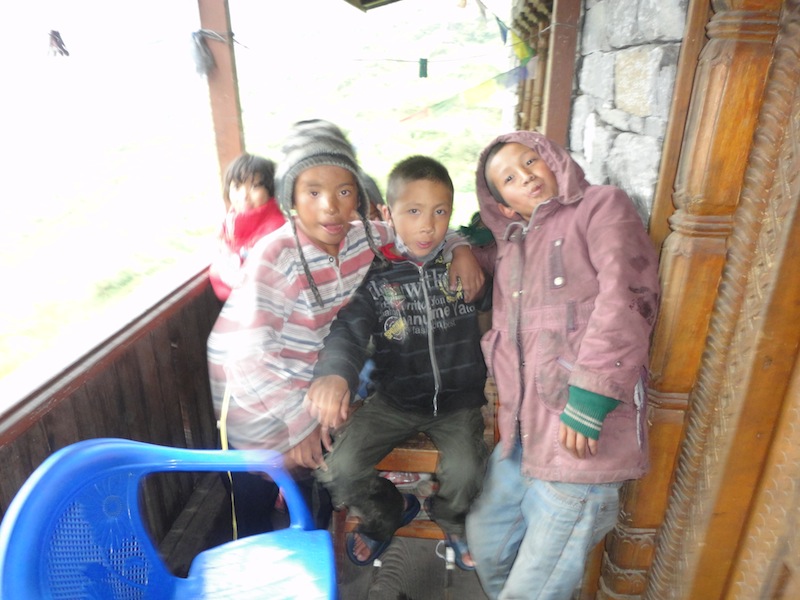 We also met these 2 rascals from the old Sugar Loaf Home – Pema and Mingmar!

On Sunday, we took tea and biscuits in the morning. We planned to go to Gatlang that so we started our walk. The way was quite risky but finally we reached there after 4-5 hours walking! Due to rain, we stopped walking and waited in ‘OK Hotel’. When reached Gatlang we ate dal that because we were so hungry! We played lots of games inside the guesthouse  – it was so much fun! We met lots of boys and girls who used to live in Umbrella homes in Kathmandu. They were so happy in village. I liked their traditional dress – we all took turn to wear it and take photos! The village was so cold so we had to burn a fire – that was so amazing.

The card games got pretty serious!

On Monday, we put tika in the morning. We all 13 children were not with our parents but we could celebrate Dashain in Rasuwa. Our chief Brother and Sister put tika on us and gave us some money and presents. Due to raining all that day, we cancelled our plan to visit different places but we enjoyed the day by playing cards.When I got up in the morning I was so tired. So, I took some rest and bathed in the freezing water! On this day, we planned to go to Kathmandu but due to bad weather, we again stayed another day. 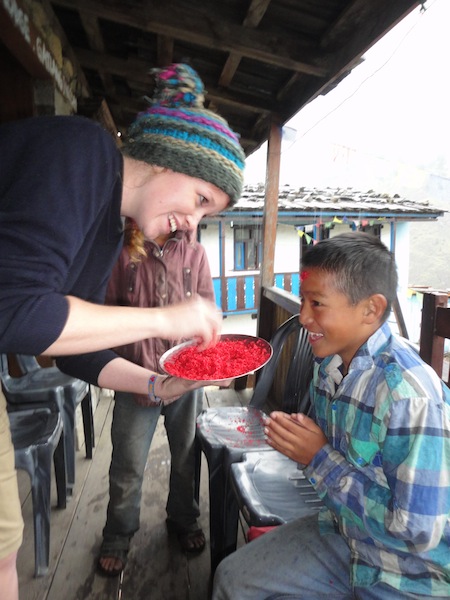 On Tuesday we visited a lake, a buddhist gumba and a yak cheese factory. Then we walked back to Syaphrubesi. It again took 5 hours from the hillside. We walked the whole way but some volunteers got lost! Again, we stayed in the same guesthouse and played different games in the evening. 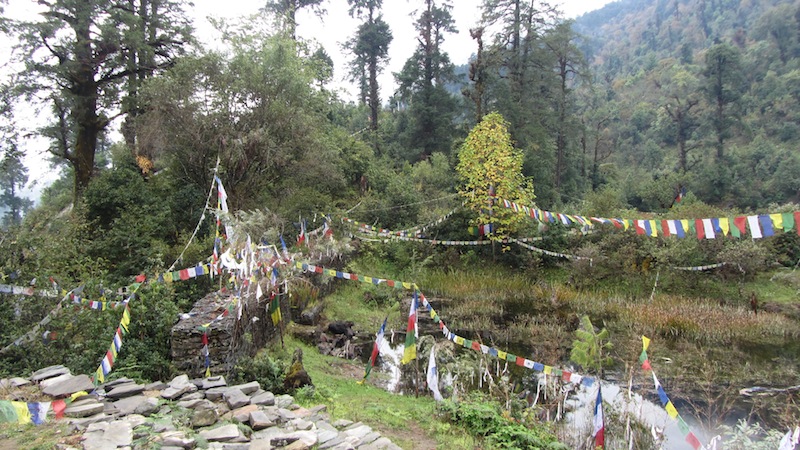 The beautiful and mystical Parbati Kunda – a scared buddhist lake above the village. 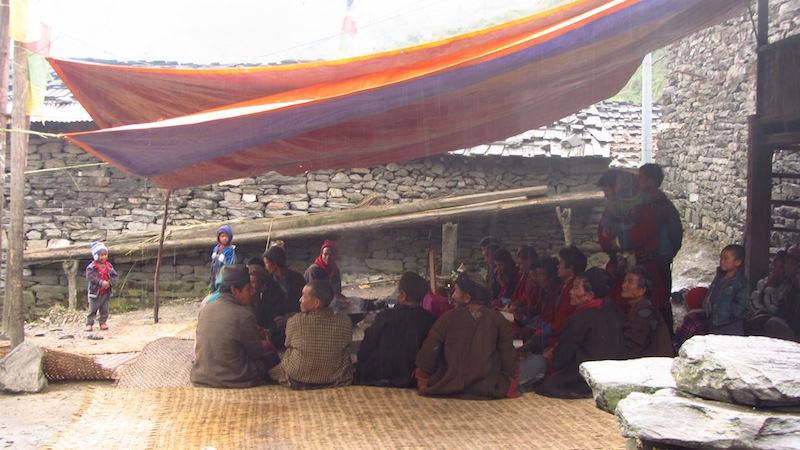 We were lucky enough to see a rare buddhist ceremony of village elders chanting, singing, eating, drinking and dancing in the village over 2 days.

We had a ticket for the bus at 7 o’clock in the morning. So, we got up early and walked to the bus. The road was not good after the rain so we had to get out from the bus an walk for some minutes. We ate some snacks on the way. We arrived at 5 o’clock in Kathmandu. We were all so tired from the journey so we ate noodles and dal bhat together and then went to bed at 7 o’clock in the evening. We had an unforgettable adventure for Dashain! 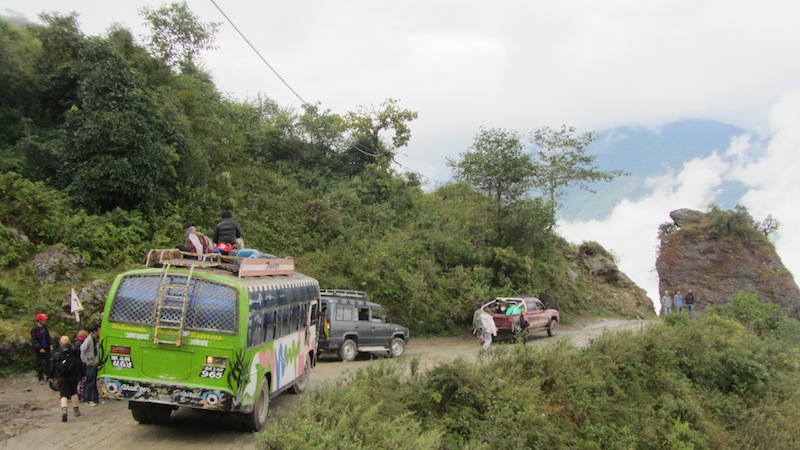 On the way home there was quite a pile-up of vehicles due to landslides which happened due to the heavy rainfall!