Since it’s inception, Umbrella has been entrusted with the safety and care of over 350+ children. Most of them came to us very young from corrupt homes and lives on the street and many were devoid of information about their background, thus depriving them of their identity.

Since day 1, Umbrella has strived to reconnect them with their surviving families and we have sought out the parents, the aunties, the uncles, the brothers and the sisters of our children time and time again due to the relentless work of our team. This search has brought us the length and breath of the country and every single day in Umbrella we gather another snippet of information about the identities of our kids.

We have been blessed with many beautiful stories and wonderful re-connections over the years and each and every one of them is a miracle that makes an incomprehensible impact on the young lives of our children. However, there are always some tales that rise above the rest. One such story is that of Anil (name changed), a young boy in our Manasluhome.

Anil originally came to us in 2009 as a 10 year old and we had little or no information about him or his family. However, gradually over the years, we started to build up his profile. As we became to learn about Anil’s life, we discovered that he came from a tiny remote village in the Rukumdistrict of western Nepal, which was ravaged by poverty due to the years of civil war in Nepal. 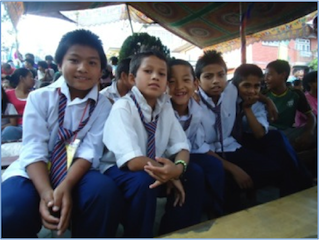 Tragically he had lost both his parents very young but that he had had an auntie, whom he was very close to, and who had taken him and his three sisters in after their death. However, she was an uneducated and unmarried woman of simple means and she soon realized that she could not provide for them adequately so upon being told about an organization in Kathmandu that would provide for them (Not Umbrella) she reluctantly allowed Anil to be placed in a children’s home on the outskirts of the city at the tender age of 6.

After investigating and eventually learning of the aunt’s identity, we contacted her immediately and took Anil back to their village during the Dashainfestivals and his school holidays so that he could re-build his connection with his home community after many years in city of Kathmandu.

Anil’s aunt divulged everything she knew about Anil’s life and also that of his sisters. While Anil had been distraught upon arriving in Umbrella and talked often of his sisters, due to his very young age he could not recall much and we knew little. She told us their harrowing tale of separation that started after Anil had ran away from their first children’s home to another, because of feeling very unhappy, leaving his sisters behind. She also spoke of her futile efforts to reconnect them and how it was only after traveling to Kathmandu to visit the girls one year that she had learned that they had also moved, or rather been transferred to another home, without her knowledge.

Upon tracking the girls down again, she tried to visit them but to her horror the management of the new home told her that she could not. The children, the management said, were orphans and therefore they had no family and she was not allowed to meet them as that would confuse them! Feeling distraught and powerless she returned to her rural village but continued to make enquiries as to their wellbeing and Anil’s regularly.

It was upon hearing her account did we truly started to understand the obstacles that this poor woman had tried to overcome and Gopal, our Child and Protection officer, vowed to make it right and re-connect the siblings after all these years.

While she recalled the name and rough location of the sister’s home, when our field officers visited it, it was gone. However, through numerous visits, local enquiries and multiple phone calls over an extended period, we eventually found it’s new location and happily contacted them to announce the great news that we had found the long lost brother to three of their girls. However, to our amazement the management of the home was not only not receptive, they were completely hostile to the idea of the siblings meeting!

However, undeterred, we continued to hound them with visits, calls and threats of government intervention until eventually, three months after the initial contact, they finally relented. As the date of the arranged meeting approached Anil was silly with excitement and very emotional as our field officer took him and his auntie on the bus to his sister’s ‘home.’ As Anil walked in the door, he broke down as he saw his three long lost sisters, and after 7 long years apart, Anil, his auntie and the girls, held each other in a long embrace, together.

It was a beautiful moment that encapsulates everything that Umbrella stands for and works tirelessly every single day to achieve. Anil’s story is just one of literally hundreds that we are privileged to make happen here in Umbrella, please help us to make more and DONATE TODAY. 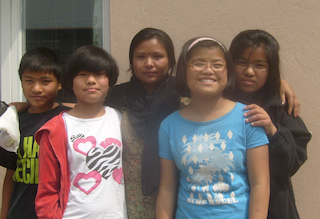