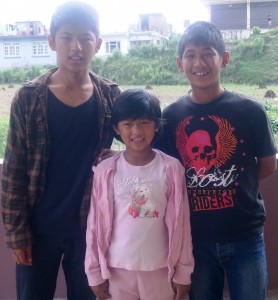 “Our happiness knew no bound when we met our sister.” Rajesh and Lokendra meet their sister Soni.

Brothers Rajesh and Lokendra live in one of  Umbrella’s childcare homes in Kathmandu. The two brothers were sadly separated from their family at a very young age. Their father worked as a truck driver but, after a traffic accident left him disabled, he was unable to support the family. Rajesh and Lokendra were sent from their rural village to Kathmandu to live in an ‘orphanage’ where they were promised safe care and an education.  In reality, this corrupt children’s home kept the brothers malnourished and living in squalor. The two boys were separated from their mother, father and younger sister Soni, who they barely knew.

When Rajesh and Lokendra were rescued by Umbrella, they were given a safe, loving home and an education at the local government school. Umbrella’s dedicated reintegration team were able to track down their parents and also their little sister, who happened to be living in a nearby childcare home in the Kathmandu valley. As it turned out, little Soni had also been separated from their parents at the age of just one and a half. Through collaboration between the staff at Soni’s new home and Umbrella, it was possible to reconnect Rajesh and Lokendra with their little sister for the first time in nearly eight years!

Although the boys were a little nervous at first to meet with Soni after so long, they warmed to each other in no time at all. The smiles were instantaneous! Shortly after the three met, it was possible for them to return to their home village in the district of Dhading for the Dashain festival season, a very important time for families in Nepal. Three siblings who might otherwise have been living destitute on the streets of Kathmandu or in an abusive children’s home, were now reunited and were able to share laughter, hugs and stories with thanks to the dedicated team at Umbrella!