The Umbrella Foundation is a family-first, children’s charity working to relieve the impact of trafficking, poverty and war on the children of Nepal through projects which promote education, reintegration and community development. 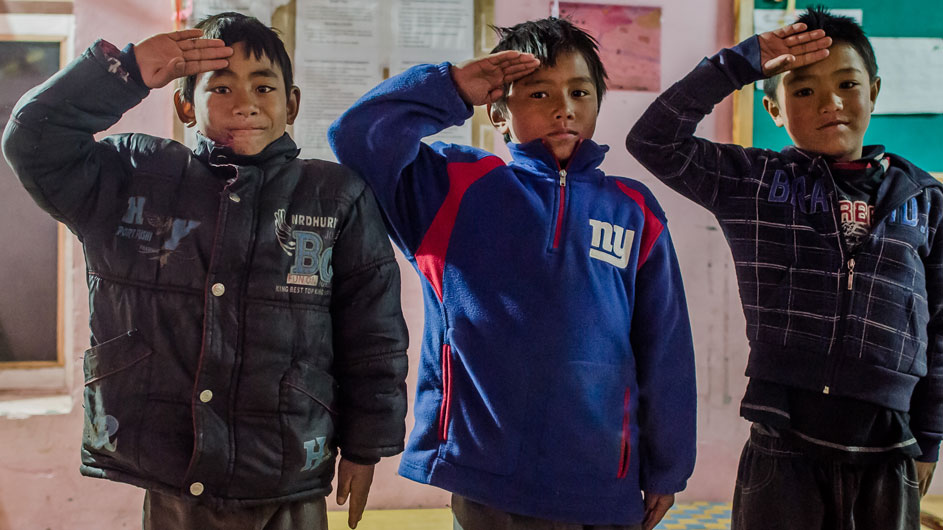 Nepal has gone through many changes over the past two decades, with a 10-year insurgency changing the face of the country forever. Children were the biggest victims of the civil war and the thousands living on the streets or in homes and orphanages are the constant reminders of the price of Nepal’s struggle. 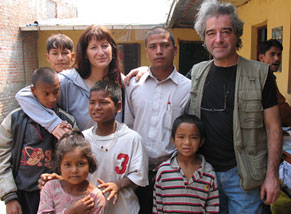 Northern Irish writer and teacher, Viva Bell, lived through it all, seeing the country she loved being torn apart and witnessing thousands of conflict-displaced children arriving in the capital every month. Feeling helpless and frustrated, she started to take action to address the problems on her own doorstep.

Viva’s course was set in motion when she met a street-child suffering from a simple throat infection. With no one to care for him, it had developed to a stage where he was severely dehydrated. She brought the boy to hospital and helped nurse him back to health and, after he recovered, she placed him in the care of one of Kathmandu’s many ‘orphanages’. It was at this point that Dave Cutler entered the picture, offering to support the home financially and establish The Umbrella Foundation as a charity in Ireland. With his friend Harry Coogan as the Director in Ireland, they fundraised to renovate and improve the living conditions for the resident children. However it wasn’t long until the trio realised that their money was being siphoned off by the home’s managers, who were involved in other abusive behavior also, not an uncommon problem in Nepal’s ‘orphanages’. The answer was to take control of the matter themselves. In 2005, Viva and Dave founded The Umbrella Foundation and set up a residential childcare home of the highest standards. With the help of the government’s Social Welfare Board, they closed down the corrupt ‘orphanage’, rescued the children, and placed them in the homes where many continue to live today. These healthy, happy and well-adjusted children have been given a new lease on life and, for the first time, a dream of a better future for themselves and their country.

Jacky Buk from France took the mantle as country director and worked tirelessly to build up Umbrella to the organisation that stands today.

In 2009, an enthusiastic Irish team took over the helm. Originally from Dublin and in their mid-twenties, Stephen Jenkinson, Conor Fox and Amy Mulcahy each contributed enormously to the charity. Projects initiated included a family reintegration and support programme, the Rasuwa project and the child protection and development scheme (with DeParaplu Holland). 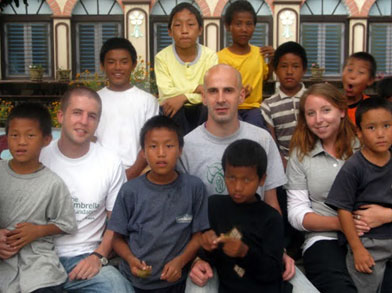 Stephen, Conor and Amy with the kids

They also developed volunteer and sponsorship programmes, improved organisational structures to maintain sustainability, and built up the reintegration team to facilitate and monitor the successes achieved.

In 2010-11, with an improved management structure for Umbrella in mind, a qualified and competent team of Nepali staff was hired to complement the international staff.

During 2011, Stephen, Conor and Amy returned to Ireland where they remain actively involved on the board of directors. 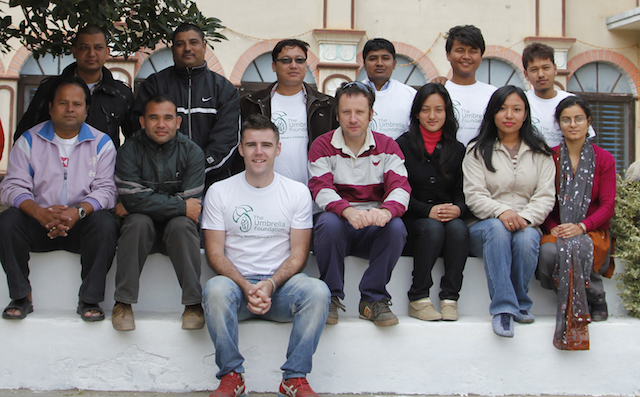 In late 2011, Umbrella recruited Shane Cogan as country director and Macartan Gaughan as communications director. They launched volunteer teaching placements as part of the Rural Education Support Programme and Umbrella Trekking, a not-for-profit company offering travel opportunities for visitors, providing trekking-guide experience to our young adults and generating funds for The Umbrella Foundation. As of 2012, 156 of our children had been successfully reintegrated with their families and communities. 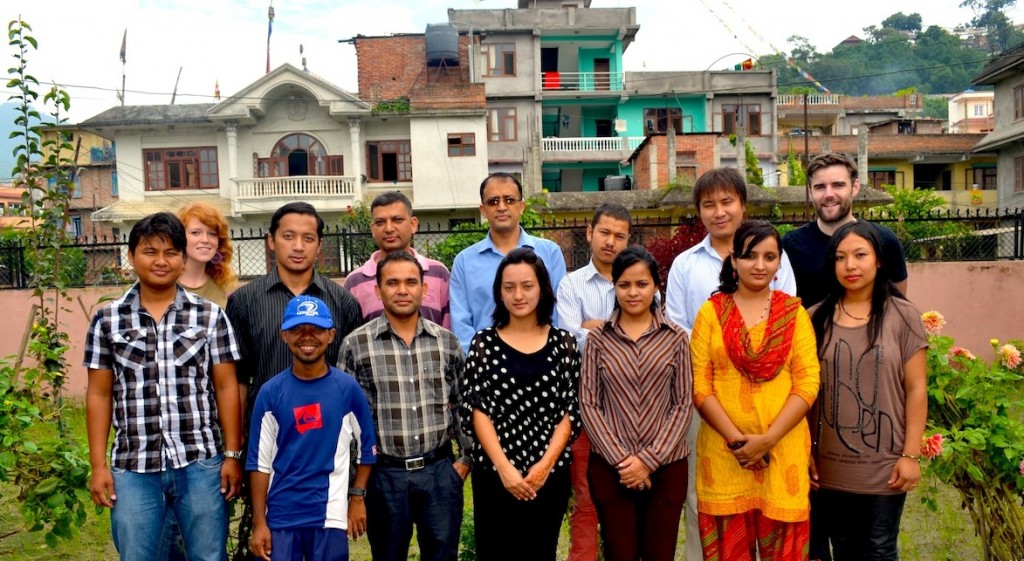 In December 2012, Macartan Gaughan took up the position of country director and Rajendra Kumar Raut came on board as Programme Director. Éadaoin Close, a volunteer in 2011 with a background in primary teaching, stepped into the role of communications director, looking after all things sponsorship- and volunteer-related. Highlights in 2013 included the work of the reintegration team with SVN, family tracing and rescue cases, the launch of our new website, partnerships with supporters in Australia, Hong Kong and New Zealand, and the launch of a ‘Girls Health and Empowerment’ programme. In late 2013, we said farewell and thanks to Macartan Gaughan for his enthusiasm in strengthening Umbrella as an organisation and tireless dedication to the care of the children and youth for almost 2 and a half years. He still remains actively involved overseas in raising funds and awareness. The torch was passed on to our new Country Director, Caroline Scheffer, a previous volunteer in 2010 from the Netherlands. Caroline has a Masters in Children’s Rights and has plenty of experience, having been working in organisations in Nepal over the past 3 years. 2014 saw a large number of our children successfully reintegrated as Umbrella continued to grow and excel. We are know considered to be one of the leading INGOs working in childcare in Nepal.

In late 2014, Umbrella said goodbye to Éadaoin Close as Communications Director and also to Rajendra Kumar Raut as Programme Director. Both Éadaoin and Rajendra worked tirelessly in developing our organisational capabilities and providing support for all of our children and youths. In place of Éadaoin came Jack Hogan, who volunteered with Umbrella in 2012 and Prem Singh Tharu  arrived to take over from Rajendra. 2014 also saw the arrival of Shyam Lama as Education Officer, Jay Ram Gurung as Admin Assistant and Dil Raj Joshi & Nabin Maharjan as Assistant Child Protection and Development (CPD) Officers. In addition, the office welcomed back Raj Kumar Magar.

The Team in Post-Earthquake Nepal

On April 25th 2015, at 11.56am, a 7.9 richter scale earthquake hit the Gorkha district of Nepal. The tremors were felt around Nepal and affected over 8 million people. Approximately 500,000 houses were destroyed and nearly 9000 people killed. The quake came as a huge shock to everyone concerned with Umbrella, however the children, youths, staff and supporters around the world reacted with great strength and bravery. Due to our preparation, we were well equipped to deal with the challenges that a disaster of this magnitude presented.

Thankfully, all of the Umbrella children and staff were unharmed by the tremors, however considerable damage was done to the homes and villages of the reintegrated children we support in Rasuwa, Nuwakot, Dhading and Gorkha and Sindupalchowk distrcits. Umbrella responded to the earthquake by distributing clothes, tents, food and materials for building temporary shelter to affected communities. Child Friendly Spaces and Temporary Learning Centres were also constructed to enable children to access education, where schools had been damaged or destroyed.

In August 2015, Umbrella said goodbye to Jack Hogan and welcomed Scott Rosefield in his place as Communications Director.

Following the earthquake, Umbrella took on over 20 new staff members including Kusum Rana in our Youth Office and several field officers to assist with our earthquake response projects in rural areas.