The laughing and shouting of the kids guided me up the hill and over the rubble of Umbrella’s toppled ‘Wall of Hope’ into Camp Umbrella on the playgrounds of Manaslu, on the morning of April 29th – 4 long days after the earthquake had hit. “Namaste brother,” Pasang shouted with a smile on her face with the kids behind her buzzing between food preparation, cooking and cleaning stations, all pitching in to make the morning dal bhat. The activity room, usually home to our kids strutting their latest dances moves in front of the mirror had already been transformed into a make shift Umbrella office and everyone was huddled around making plans for the day, sitting on the floor among the bags of rice, bottles of water and canisters of gas that had been salvaged from the homes in the immediate aftermath. I got a quick round of ‘Namastes’ and smiles, with a few hugs thrown in for good measure before it was back to business for the guys – taking time to absorb this surreal experience would have to wait. 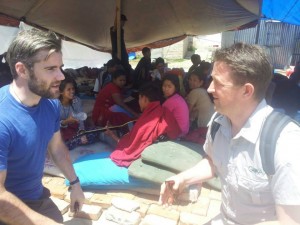 The team had already been split into small working groups and everyone, particularly the house parents, were busy going about their jobs with amazing energy. When I enquired about the supply levels, nervous eyes flicked to the diminishing water bottles and back to me, apprehension written on every ones face. We had enough for 2/3 days, but past that there was still great uncertainty. The phones had been down for 2 days and news was very slow in spreading. Despite the surrounding troubles, I sensed a great togetherness among the group. Everyone, the local staff like Raj Kumar Magar especially, was putting in a huge effort to stay positive and remain calm, despite the (still) regular after-shocks and the deteriorating situation. 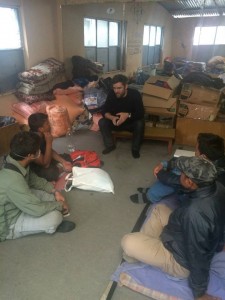 Mac meeting with the Umbrella team in their new ‘office’ at Manaslu house.

Outside, some of the younger kids, under strict instructions not to stray from the playground, sat around under a huge fabric sheet that rose pointing upwards like a circus tent, its corners tied down with rope in every corner of the ground. Some children were playing ping-pong, others were engaged in the one available game of Uno cards while the remainder patiently waited their turn. Walking around, I quickly came across 3 of the older boys, fetching water 20 metres down from the rapidly depleting well in Manaslu, with a rope and bucket, to be used for washing dishes and hands later. Chores and activities played an important part in occupying everyone’s thoughts, but for the most part, the kids were stuck in limbo, with little to do but sit, stare and think about what had happened.

That night we placed our meager few mattresses atop an inventive ‘floor’ of bricks from nearby rubble, which had been placed neatly side-by-side on top of the ground. This allowed the falling rain to run along the ground underneath our bodies lying on the raised floor, as the winds pulled at our tent. The 50+ people crammed in, boys on one side, girls on the other, under shared blankets, all trying to rest as the water dripped down the sides and through the numerous holes of our cover. Everyone was anxious in anticipation of more aftershocks that night, but sleep gradually took hold and we slept, exhausted.

The next morning, I rose before the sun and stepping outside into my freshly soaked shoes, I sat on a box watching the kids rise from their mats. A strong shake at 5am that morning had interrupted my, and most people’s, sleep. Akash, close by, was furiously winding a crank powered torch desperate for some light, while the other kids nearby stared into the mist. We were a sad sight, myself included, tired dirty and wet – some help I was going to be! The low drone of whispering accompanied the sun as it rose from behind the Kathmandu mountains before Sunchari, the house mother of Manaslu, exploded into a fit of chatter and laughter jolting everyone from their daze. Rajan, radiating his trademark smile, was sitting cross-legged slapping playing cards to the ground all the while spouting some ingenious observations of our situation, infecting everyone with laughter as always- what a legend! 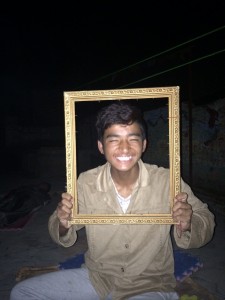 Rajan, keeping spirits high with laughter in spite of great sadness and tragic loss all around.

I could see that while another wet and miserable night had lowered the spirits, our group, the Umbrella family, was coming back to life. The kids, resilient as ever, having already been through such difficult lives, were perking back up – I had no doubt that we would get through this.

The following two weeks for me in Nepal were a whirlwind of tent making, supply giving and bike riding but I often found myself in awe of the energy showed by Caroline, Jack and all our staff as they worked tirelessly to ensure the safety and wellbeing of the kids in our homes and those reintegrated.

Mac and the Umbrella kids shifting rubble from Annapurna house.

Since then, the huge level of support provided by our worldwide Umbrella family has equally amazed me and it will be invaluable in supporting those working in Nepal to overcome the huge challenges that await. Nepal is suffering greatly but there is hope ahead and as the kids will often tell you, no matter what happens – “Always be happy, never be sad, this is my request, never forget that.”