Arjun Dhakal came to Umbrella a tired and fragile teenager, with his sick younger brother under his arm 5years ago after spending years on the streets of Kathmandu. With the help of Umbrella however, he had been able to turn his life around and explore his talents within academics and the arts.

Arjun: “In my life there have been many mystical and shocking moments. I was not born on the street but I have spent most of my time on it. “

As far back as he can remember Arjun and his brother (Sunil) were domestic servants for a rich family on the south side of Kathmandu. His father had given them away years before to the family so that they might work and earn the opportunity to get a good education in the city. However, never content with this life, and after years of unhappiness, Arjun and Sunil ran away from the home and onto the streets of Kathmandu. To make a living they sold Momos(Tibetan style dumplings) from a small stand in the local bus pack.

“Life was too hard when I was on the street, I would not eat for one, two, three days. Finding a good shelter at night for my brother and me was the big problem. When you are on the streets, you think every day to survive.When you take glue, you don’t feel the hunger, cold, anything. You forget this world and live in your own head.”

However, after two hard years on the streets, tragedy struck when his younger brother Sunil fell very ill. Unable to treat his brother, and fearing the worst, Arjunstarted to ask around for help. He came across another street child who spoke of a place, which took in street children, feed and cared for them. This seemed like a dream to Arjun and so he left his stand behind and traveled half across the city on foot to the area of Swoyambhu, and Umbrella.

When the two brothers got to Swoyambhu they were lost and not knowing where to go they wandered in circles, feeling and looking exhausted in their tattered clothes. They started to attract attention from locals who could see their dire state. It was October 2006 and during this time celebrations taking place across Nepal for; ”a festival called Teejin which women wears red clothes, red bracelets, rings. These women asked questions seeing our worst condition because we were hungry and my brother was sick. In this festival woman take fasting for the betterment of their husband and for coming up their lover.

Mainly Teej festival is respecting to man and kindness so they brought us down from Swoyambhu Buddha Park to Kimdole and the Umbrella Organisation.”

Once they got to Umbrella however, there was a problem. Jacky Buk, the Country Director of Umbrella at the time was not there and the Nepali staff, unsure of what to do, told Arjunthat he must return the next day and survive another night on the streets. Luckily for him though, Umbrella already had some boys who too had lived on the streets before, and recognizing their brother they gave Arjun help.

“Karjit brother and Sushil brother provided us with food to survive for the night and Ejraili, an old woman gave a water bottle of 2 litres. We managed the cold and mosquito night near Buddapark jungle and I decided to return with my brother Sunil back to Umbrella for giving water bottle. However, we didn’t see anybody on the gate, it was locked, I didn’t know what to do? So we left the bottle by the gate and started walking away. When we were walking Chandika aunt cried through the back “Boys were are you going! Come with me, my husband will talk with Jackie and after that you could stay in Umbrella.”

Jacky Buk and Viva Bell, seeing the terrible condition that the two boys were in, took them both into Umbrella and with that their lives changed forever.

Arjun started to attend school for the first time in many years and entered our Next Steps programme after his SLC to study science. Also, through Umbrella’s connection with our long time supporter Mick Bromley of wilderness trekking (www.wildernesstrekking.com) Arjun got the chance to learn about the tourism industry and served on his Nepal trekking expedition in 2011.

“So the wonderful time was I went trekking for 23 days with the opportunities oven by Mick Bromely sharing thoughts and spiritual energies on the Grenaryway up to Moogumba of the Giorkha district lifestyle of the people of Nepal. According to altitude change, language difference, different culture, and religion is awesome” 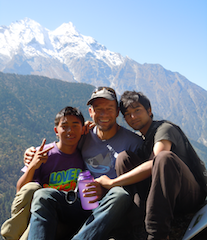 Still, while life was going well for Arjun, his history, or lack there of, came back to haunt him. In Nepal, every person, upon reaching adulthood, must obtain a Nepal citizenship card for voting rights and to prove their Nepali nationality.

To do so, they have to show proof of their father or family’s Nepali citizenship. However, Arjundid not know anything of his family or his father and he had never been in touch with them. Despite our sustained efforts, Umbrella was not able to help circumvent the Nepali government policies and so Arjunwas left with no choice but to retrace his steps and find a way back to his village.

Last month therefore, for the first time since he went running from its door, Arjun visited the home of his former masters. He told the family of his dilemma and pleaded for their help to solve this mystery. Miraculously, despite 7 years in passing, it transpired that they still had the letter that Arjun’sfather had written to the family when he signed over his two sons to them! This letter was the missing link that Arjunhad been looking for all these years as it contained the integral information that he had always lacked and continually wondered; his father’s name! Ecstatic, Arjunnow knew what he must do and so four weeks ago he traveled back to his village for the first time in 11 long years to track down his father and his family.

When he arrived Arjun discovered that his father was no where to be found, but thankfully his mother was still in the area, although she had remarried. Therefore, with his mother, a letter of representation from Umbrella about his difficult history and numerous calls from our programme director, Arjunwas able to prove his Nepali ancestry. He was finally able to garner the essential information necessary for him to become a citizen and take his rightful place in Nepali society.

As Arjun comes to the end of his time under Umbrella’s Next Steps programme he is able to contemplate his amazing journey from cleaning his masters floor and the streets of Kathmandu, to obtaining his education and climbing the Himalayas. His future has many possibilities thought impossible only years before and he has you, the supporters of Umbrella to Thank for that.

We want to make many mores stories like Arjun’s possible and we need your help more than ever to achieve that goal. 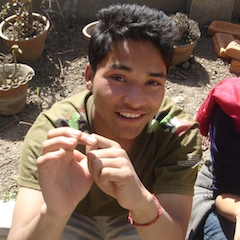