Sabina, 9 years old, has been rescued from a life of domestic servitude in Kathmandu by Umbrella and reintegrated with her uncle, aunt and cousins in the Sindabolchowk district of Nepal.

Sabina’s father was an alcoholic and died in 2012, after which her mother moved to the Middle East with the intention of finding work to support Sabina and her two siblings. During this time the children moved in with their uncle’s family nearby. However, after sporadic communication and minimal financial support from their mother, and due to their uncle’s poor economic condition, Sabina’s 10 year old brother was sent to a Buddhist monastery in India and Sabina and her 12 year old sister were sent to work in a home in Kathmandu as labourers. Their uncle’s destitute financial situation was the prime reason for their departure – a tragic consequence of poverty.

When Umbrella’s Child Protection and Development Manager (Gopal Ghimire) came to know of their situation, we reached out to their female ‘master’ to convince her of their plight and to secure their release – a difficult process! While we were eventually able to get Sabina out, her older sister has been reluctant to leave so far, as she has been anxious about what may happen. We suspect that the house owner has been making her nervous about possible repercussions, which has made it difficult. As we cannot force Sabina’s sister to leave, we must be patient and work with her behind the scenes so that she can make the right choice. We will be following up on her regularly over the coming weeks and months if necessary and it is hoped that she will see and learn about Sabina’s development at home. 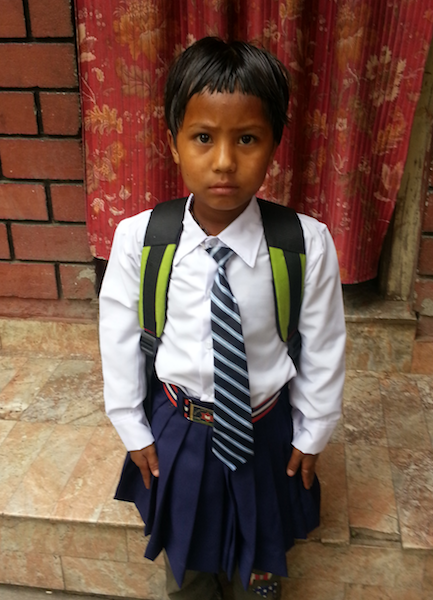 After being returned to live with her uncle’s family in June 2013, Umbrella started to provide some support for Sabina’s education costs, so that she could enrol in the local school. Guna Raj Thing, Umbrella’s Assistant Child Protection and Development Officer, visited Sabina in August and reported that she is doing really well. Also, at Umbrella’s encouragement, the uncle made renewed contact with her mother in Kuwait and she has begun communicating again with her daughter. It is hoped that this development will also encourage Sabina’s older sister to return home in the near future.

Umbrella believe that poverty should not be the prime reason to separate a child from their family – we support families to stay together in their village, so that they can grow up surrounded by their relatives, their neighbours and their community. This community helps them form their identity – who they are- with psychosocial benefits lasting their whole life.

For more information on Umbrella’s approach; reconnection to reunification and then reintegration please visit our Reintegration page.

Unfortunately Umbrella has not had the financial resources to perform large scale rescues over the last few years but we are reintegrating as many of our children as responsibly possible and we are committed to helping other organisations rescue and reintegrate where we can.

If you would like to further support our work please consider DONATING or seeing how you can get involved in the ‘How To Help’ section of our website.

(Note: Sabina’s name has been changed)