(from right): Fr Eanna, Stephen, Kian and Philip in our Kanchenjunga home, where they were volunteering

This summer I and nine other students from Terenure College were lucky enough to be given the opportunity to travel to Kathmandu, Nepal, to volunteer with The Umbrella Foundation. We volunteered there for 17 days. The trip was sponsored by the Carmelite Youth Ministry and 3 other members from the school community travelled with us. However this trip involved a lot more than just travelling to Nepal as we had to raise money to cover the cost of our trip and to leave a donation with The Umbrella Foundation. We fundraised throughout the year by bag-packing, church collections, table-quizzes, raffles and many other events.

In total we managed to raise over €35 000 and although it was very hard work in hindsight it was worth it.

We left cloudy Dublin on the 27th July and we arrived in Kathmandu after two flights and over 12 hours of flight time. We arrived tired and slightly jet-lagged however we soon forgot about the fatigue when we exited the airport. The poverty in Kathmandu could be seen immediately after leaving the airport. We travelled along the “ring road” to our accommodation. One would normally associate a ring road with a large dual carriage-way or motorway however in Nepal a ring-road is merely a road large enough to have two directions of traffic. We also got a culture shock on the bus as we watched the bus manoeuvre in and out of traffic and avoiding oncoming cars and motorbikes not to mention the cows lying in the centre of the road. 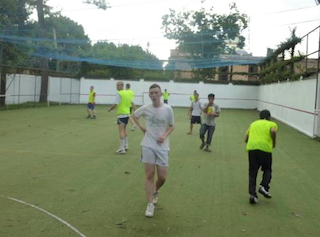 The Terenure lads and Umbrella kids playing football together

After a few days we managed to adapt to the Nepalese culture, well most of it. The food took longer to get used to as our stomachs tried to overcome the spice of the traditional Nepalese food that the nation lives off. This food is called Dal Bhat and it is a rice dish with a sauce called “Dal” and spicy vegetables. Although it is a delicious meal the thought of a spicy curry-like meal at eight in the morning wasn’t always appealing!

On the second day we got down to do what we came for. We were all allocated certain children homes that we would help in. Each home has long-term volunteers who give up three months to work with the Umbrella Foundation. At first we were all anxious to meet the children and teenagers especially considering some of the boys were the same age as us, if not older. However any doubts we had were quickly forgotten and all the children made us feel more than welcome. The first meal was eventful and the boys and girls all found it humorous as we tried to eat the Dal Bhat with our hands. Any tension in the houses quickly vanished after dinner when the boys and girls invited us to play games with them. These homes are very basic and the children have to make do with what they have. As a result we played games that involved throwing coins or some of the boys would make small footballs out of plastic bags.

Over the two weeks we grew closer to the children as we spent more time with them. Our daily routine involved walking the younger ones to and from school, playing games or football with them, helping them with their homework, and eating meals in the houses. 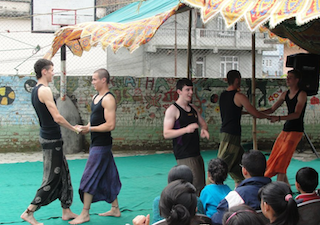 There were a few exceptions to our routine. For instance on the first Saturday we organised a sports day for all the children. It was very successful and this was easily seen on the children’s smiling faces. The girls whom normally dislike taking part in the football matches really enjoyed this sports day, especially playing the game rounders. All the boys in the homes love football and as a result we spent a lot of our time playing football matches on a concrete courtyard beside one of the houses.

On one of the last few days we had a football match on a grass (mostly mud) pitch where the volunteers played against some of the older Nepalese boys. Unfortunately we lost 5-2. It was a close game; closer than the score suggests! We really enjoyed the game but more importantly the children loved it.

Two days later we had the farewell ceremonies in the houses and the house father, mother and the children said goodbye to us. We were all sad leaving and wished we could stay for longer.
It was truly an exceptional trip and it’s only when you visit the homes you realise how important the volunteers and sponsorships are. The trip helped us to put things into perspective also and it helped us realise how lucky we are and that we don’t always appreciate what we have. Although the children don’t have anything they are always happy and this has had a lasting impression on me.

However it’s impossible to sum up the trip and its experiences in words and I would recommend anyone considering volunteer to do it and I’m sure you won’t regret it. 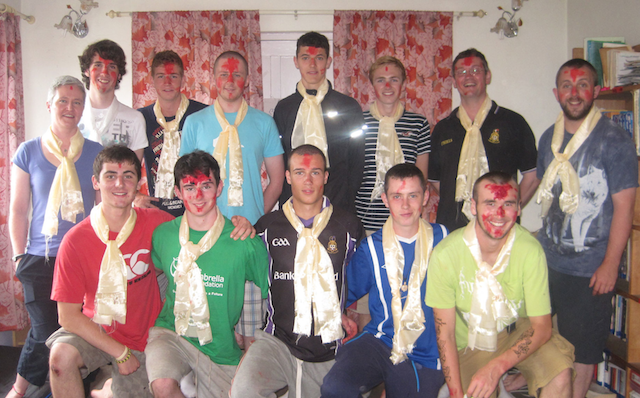 The Terenure group, lovely and red, after their leaving tikkas in their respective Umbrella houses!