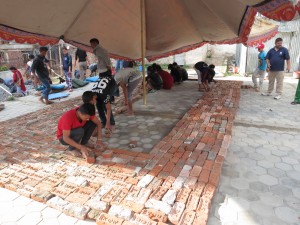 Shyam Kumar Lama is the Education Coordinator at Umbrella and he is also the tutor to 30 boys at the Umbrella Annapurna house- this is Shyam’s earthquake story:

I woke up at 5:30 AM and got fresh, then called to Annapurna and two volunteer brothers to get ready for the movie. We moved towards the movie hall at 6:30 AM but due to the 2nd day of release there was a big crowd of people. Then I gave my sunglasses and water bottle to Freddie brother and entered the crowd to get tickets and watched our boys’ favorite movie. We arrived in Manaslu and I called to Freddie just to know whether boys reached in Annapurna safely or not. I was talking about the movie with the boys in TV room, after few minutes our home began to shake with dreadful sound. Then I held the boys at the door and did not let them go outside. When we felt it stopped and came outside, we did not see the walls standing up around the ground anymore. And still it was shaking again and again as if we were on the boat. We gathered our boys on ground and another side we came to know that 3 people are inside the collapsed house just in front of the Manaslu. Luckily, we rescued one boy (around 25 years old) and took him in to a safe place. I tried to call to my family but phone was not working well. After 2 hours I got text from my brother “we all are alive”. At first I became very happy with that good news from village but later on I started to think why he said they are alive, are they all okay without any wounds? What about the houses? And so many other unanswerable questions came to my mind. Then we could not have any phone contact. We collected our all children in Manaslu house and blankets as well then we spent a night in open sky.

Then we could not have any phone contact. On another side, we were busy to collect all Umbrella children on Manaslu ground and blankets as well. Hurriedly, we separated different groups of staff assigning the duties like; security, hygiene, water, food because nobody was able to predict what would happen. Then, we (All foreign staff, Nepali staff and Children) spent a night with open roof on the ground but the evil shocks were successfully snatching our lovely sleep anyway. I hope we will not have to face this sort of disaster. I pray with God to avoid those evils in the days to come.

We washed the ground surrounding and had khichadi (mixed food of daal, rice, curry and all). I thought I will walk to my village because there was no communication and no transportation as well. But my co-worker brought me to my village on his bike. When I reached in a hill which is next to my village, I did not see any house standing up. I felt, as if I am looking at a different hill. When I reached there all people were gathered in a chicken farm and my mother had wound on her forehead, arm and foot well but not bleeding one. I tried to go to see home and she said, ‘Don’t go there, our house is no more’. When I remember that events my eyes get filled with tears. Most of the people lost their animals, we lost our 9 goats. Till that day people were not able to go to dig out the foods from collapsed homes. One day, we got 18 potatoes for a village, once we just ate beaten rice (Chiura) and sugar. I organized a class regarding hygiene because surrounding was really dirty because old people and small children were not able to go far in night time. Then I made different teams regarding hygiene, food, water, and security. Then slowly and gradually, different organization arrived in the village with some foods and other necessary things. I also brought foods and clothes from Umbrella. I got back to Kathmandu on 11th May to attend a trauma session and started to be busy with Umbrella’s work. On Tuesday, 12th May, Raj Kumar and I were assisting a psychologist to conduct the session for all children in activity hall. Firstly, we finished for girls and we were supposed to finish the session for the boys as well but again we faced a big shock. Similarly, we were in the process of moving in Annapurna, we had to move our office as well, lots of work to do. Now, we all are busy on different works for Rasuwa and Nuwakot children. Freddie and I went to Rasuwa and Nuwakot by bringing big tents donated by UNICEF and set a tent in Shantibajar, Nuwakot with help of Army men and police men. Then we got back to Kathmandu next day to continue to deal with this tragedy.