Stuart McCarthy (left) is a UK trained teacher who spent 4 years working at The British School Kathmandu. Having set up a school support project in Dhading, he shared his experience and expertise as well as resources with Umbrella to facilitate a week-long teacher training workshop in TBS for 2 teachers from Gatlang School, Rasuwa where our children are reintegrated. He is pictured above with Nima, Nabin and volunteer teacher Aideen (IRE) and Éadaoin. Stuart also researched and wrote the following interesting article about the gap between rural and urban education standards. 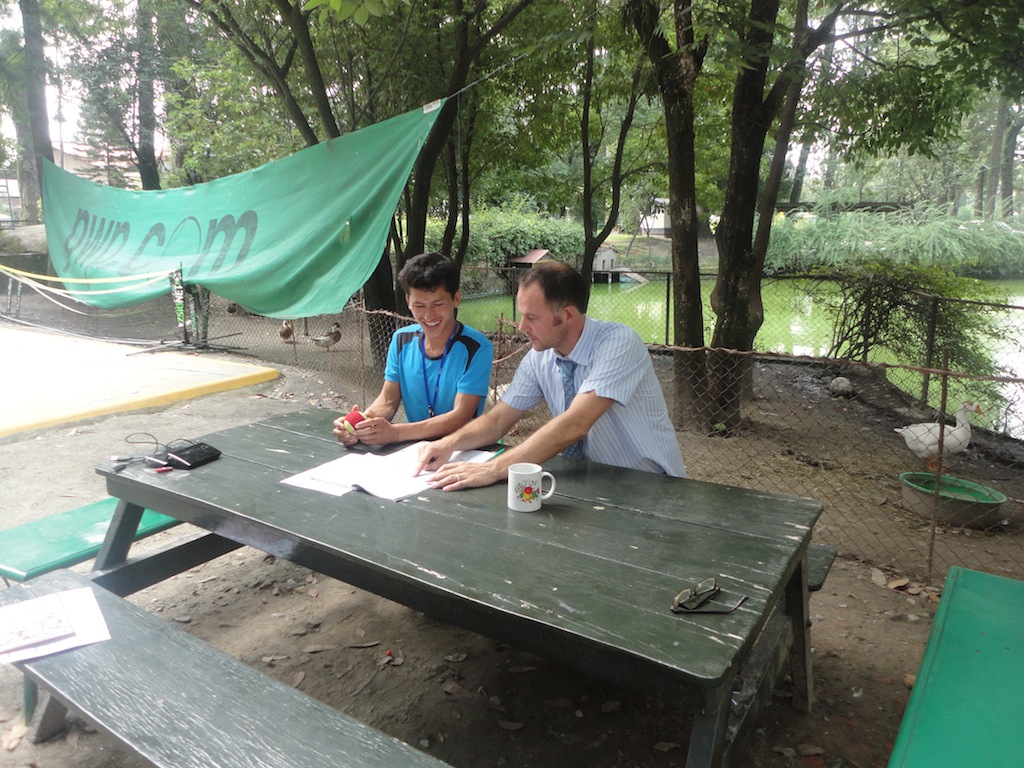 Stuart from The British School with Nima from a rural government school in Gatlang during their week-long teacher training workshop in Kathmandu.

Child trafficking in Nepal is one product of the deep uncertainty in the Nepali education system but, as Stuart McCarthy learns, there are solutions.

Over a crackling, echoic telephone line that reminds me of the Alice Oswald poem Pruning in Frost, where ‘a ghost of a world lay down on a world’, Tsewang Lama defrosts the success of The Rasuwa Project. As if agreeing that in Nepal there are educational ghosts that need to lie down, as he concludes with, “Education is the measuring rod,” the line goes dead.

Earlier, I ask Tsewang why taking children away from Kathmandu, where the level of education is far greater than the rural districts, is positive. With a worldliness that belies his youthful voice, the Re-integration Officer for The Umbrella Foundation recounts what constitutes a success: ‘When children go back [to their family],’ he says, ‘if they school regularly, that’s a success; if they do well with their family, that’s a success.’ For Tsewang, and the UN Convention of the Rights of a Child, the link is clear: a child’s education is intrinsically linked to their familial support. It gives his remit to rescue children from the plethora of corrupt homes, to return and support them, the sense of a personal mission.

Educational migration in Nepal is a not a modern phenomena, rich Nepali children having travelled to board in India for years. What is modern is both the numbers migrating to Kathmandu, Nepal’s sprawling capital, and the class of those migrating. As migration to the Arab states is for post-education age Nepalese (an estimated 37% of Nepal’s GDP is from remittances), educational migration is seen as a way to step out of the poverty cycle. Éadaoin Close, Umbrella’s Communications Director, agrees, “Kathmandu is seen, by parents in rural areas, as a better educational opportunity,” adding later, “and they’d probably be right.” It is a statement in itself about the health of rural education when many parents, desperate for their children to have a quality education, are easily convinced by traffickers to send their children to a city many have never visited.

This poor education level however is largely not the result of government educational friability. The Nepali government’s School Sector Reform Plan, described by AusAid as ‘ambitious’, constitutes 17% of the government’s budget and has recently achieved 100% gender parity in primary schools. Here is a government ostensibly committed to positive change.

The problem is accountability. Nepal fits into the distance between London and Birmingham, a geography that encompasses tropical savannah and Everest. Schools in the north-west districts of Humla and Mugu are up to six days walk from the nearest District Education Office, the chief local governance of schools throughout Nepal. As District Education Officers are not reimbursed for their travel expenses, schools unreachable by motorbike remain unvisited, the teachers unimpeachable and the children uneducated. As Éadaoin notes, “No responsibility, no accountability and no follow up.” In this environment, education is itself a ghost.

“In government schools all teachers have a permanent job,” Tsewang tells me, “and government teachers can do whatever they want. Many go into class for a few minutes and then show their backs to the sun and read newspapers.” A recent Australian Aid report supports this view, concluding that the stakeholders in the community are not represented, schools are political battlegrounds and myriad teachers unions are having a ‘negative effect on educational quality’.

Christine Stone, a freelance teacher trainer who has been working in Nepal for 30 years, personalises this further: “There are masses of teacher unions, one for every political party and they are very strong and very active,” she writes. “As a result, no permanent teacher can be sacked so many hardly teach at all….why bother if you get your money without the work?”

Umbrella, originally created to rescue and care for children who migrated into a net of corrupt Kathmandu children’s homes, recognised they were addressing merely the effects of the problem. The Rasuwa Project was their response to the causes.

The Project, focused in the village of Gatlang near the Tibetan border, worked with the local lower secondary school and teachers to become a teaching centre of excellence, both aesthetically and academically, using international volunteer teachers to model good practice while paying the salaries of two additional teachers to address the understaffing issues and provide infrastructural support. By inspiring local teachers, the education improved and the school began to bring prestige to the village. Of the 59 children from the district lodging in Umbrella’s homes returned in April 2011, 57 are still there. It is a success story.

However, in March of this year, global austerity caught up with Umbrella’s aid-stream and the Rasuwa Project was scaled-back to focus support on the residential childcare homes and concurrent reintegration work. Tsewang feels that, as the Project had such a positive effect so its removal will have a ‘negative impact’. Considering that Gatlang School has not been able to start the new term for the last 3 weeks because four government-funded teachers have not yet turned-up, it is hard not to disagree.

What the Rasuwa Project demonstrates though is that the Nepali education system does work when implemented effectively. What needs to be addressed is not the efficacy of its education, but its implementation and governance and this lies in teacher incentives. Whether or not a post-civil war government struggling to reach a consensus on a constitution has the stomach for such a fight is another question. But until it does, parents will continue to send their children unintentionally into squalor. As Country Director for Umbrella Macartan Gaughan concludes, “In Nepal they’re sacrificing their family life for education.”