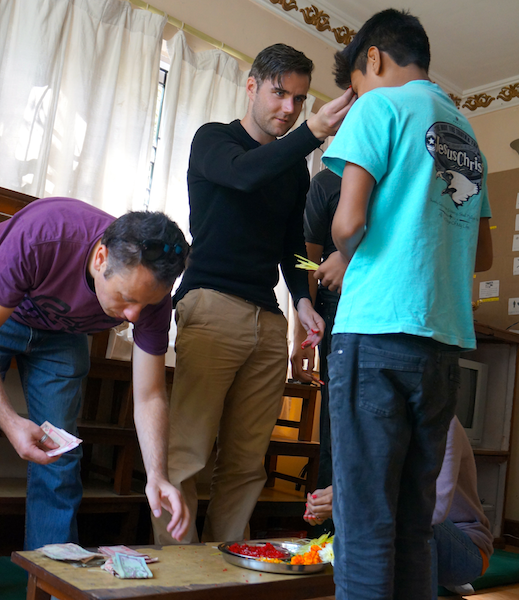 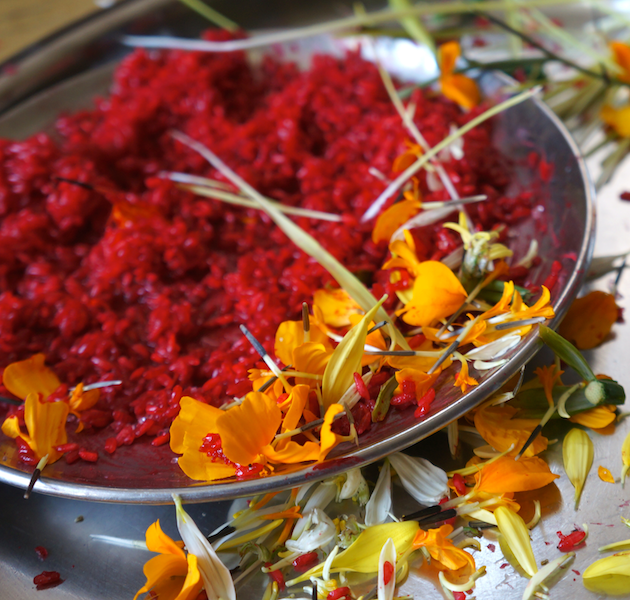 What a week to arrive in Nepal, smack down in the middle of Dashain! Many of the kids had gone back home to their village and families but for those left, we had a week full of fun activities planned. Picnics, a cinema trip, some zip-lining and playing on the swing, but the highlight of the week was definitely the over-night trip we took to Nagarkot! We started the day meeting at the Gauri Shankar House and received tikka and blessings from Mac and Shane. There was a buzz in the air, and everyone was excited to be off! Though on second thoughts, that also could have been a sugar high from the chocolate treats the kids had just been given! Everyone piled on the bus singing and dancing – our trip had finally began! The two hour bus ride went quickly, with all the kids hanging out the window watching as we quickly left Kathmandu traffic behind. 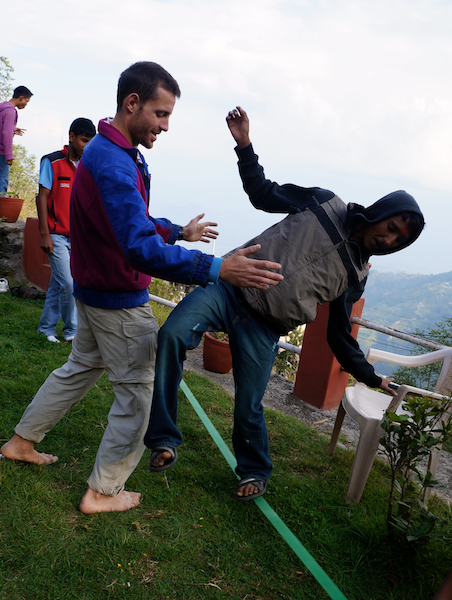 When we finally arrived at the hotel, all the kids raced each other to their rooms – which were so nice! Everyone was on vacation mode, ready to relax and have a good time. It was so nice to be outside of Kathmandu and away from the smog and dirt. We had some tea, which was probably some of the best tea I have had. It was spiced, warm deliciousness and tasted like Christmas in a cup! Several of the volunteers got tricked into eating lemons and the kids found it hilarious to see our faces contort from how sour it was! We had pre-organized activities and group games for the kids, but they were happier just hanging out, enjoying the views from the top of the mountain. The girls didn’t even want to leave their rooms as they were enjoying the novelty of hotel rooms so much! Victor brought out his slack line and set it up between two trees, and everyone had hours of fun trying to balance and walk across the rope without falling off. It’s harder than it looks, but they were running across it like they had been doing it for years! They must have learned from the Swoyambhu monkeys! Can’t say the same for myself, though some of the boys were nice enough to give me a helping hand. We also had several games of different card games going. Uno was a popular one, and i’m embarrassed to say I got dominated, though I will say I caught some of them cheating several times. When caught, they would laugh knowingly but pretend it was a mistake, so who knows how many times I didn’t catch them! Such tricksters! Of course it wasn’t too long until the boys found an empty clearing to play a competitive game of soccer. I don’t know how they had the energy, they played for hours until the sun finally went down!

Being up in the mountains, or “hills” as they call them (just HILLS?!?! They were huge!) meant the temperature was considerably colder than back in Kathmandu. We started a bonfire and all cuddled up together enjoying the warmth. What a fun night! Marshmallow’s were brought out and some big sticks were hunted down. Yum, so good, who doesn’t enjoy a roasted marshmallow? The group couldn’t get enough! We chatted, sung songs and Victor and Shane serenaded us all on the guitar. The boys had bongos and did a great job playing along with the singing. I can also proudly say we wrote our own song, which is still being sung everyday homess, ” I want Dal Bhat, Oheaaah, Oheaaah, Oheaaah!” 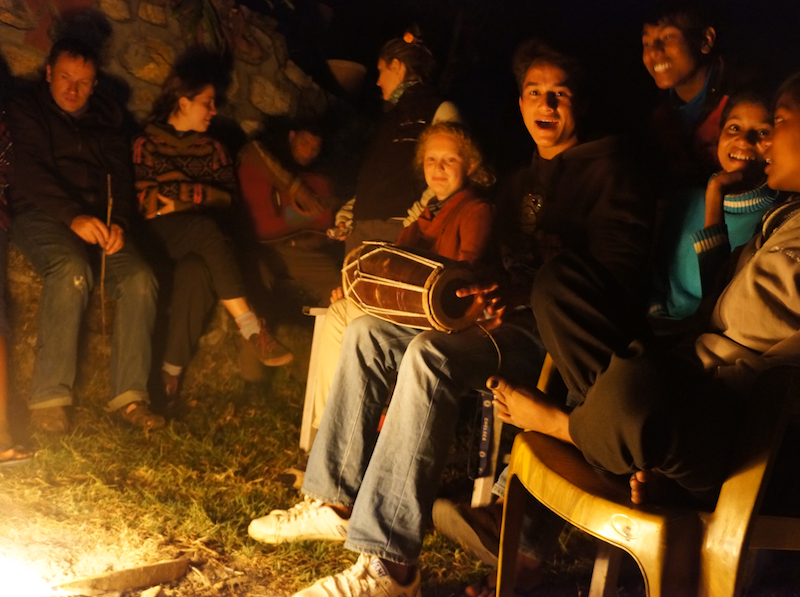 Bijah playing the drums by the camp fire 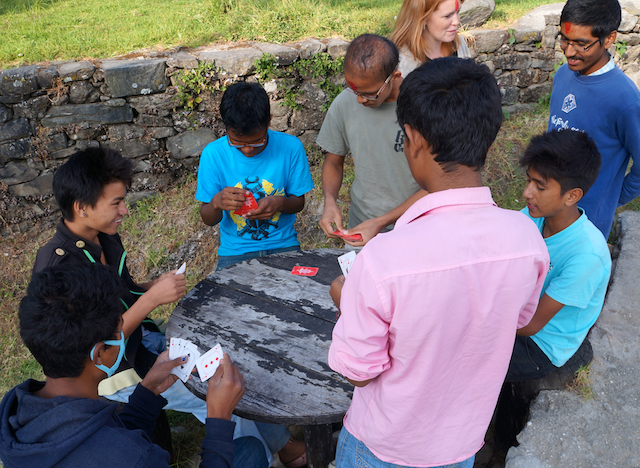 The next day we were all up early and ready to hike up to the Nagarkot viewing tower. We wanted to be able to see a view of the Himalayas and get there early enough so they didn’t get covered by the clouds that usually descend later in the day. We’d picked the perfect day, there were no clouds and the sky was a beautiful blue! It was an hour hike up to the top and we all had fun getting up there. The boys were running circles around everyone. The girls, not as energetic as some of the boys were told by Mac that it was only a 15 minute walk. An hour later, after Mac was accused of lying he just responded by saying “15 minutes Nepalese time, which translates to an hour”. The girls were not impressed (typical teens) but said it was worth it when we finally got to the top. The views were unbelievable!! We were on the very top of the mountain, with a 360 degree view of the surrounding mountain range and snow capped Himalayas in the distance. So beautiful! There was a tower that we all climbed to get an even better view, and they all enjoyed climbing all over it like little Swoyambhu monkeys. We stayed up there for a couple of hours enjoying the fresh air and views and hiked back down to the hotel for ice-cream. It was then sadly time to leave and we all piled back on the bus. Several people quickly fell asleep on the bus ride home, tired after a great two days. Everyone had such an amazing Dashain and i’m so excited this is only the beginning of my time here in Nepal and with Umbrella!! 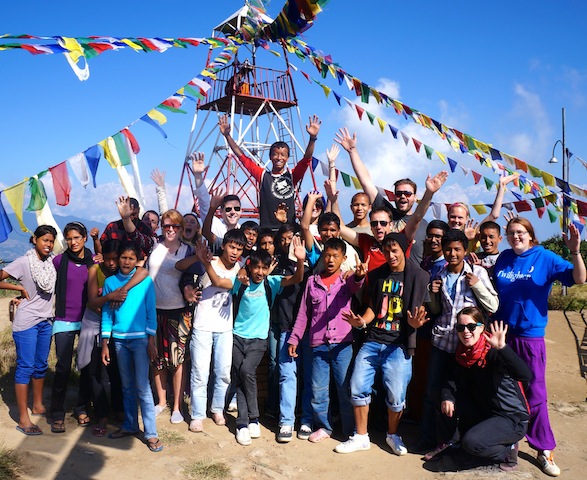